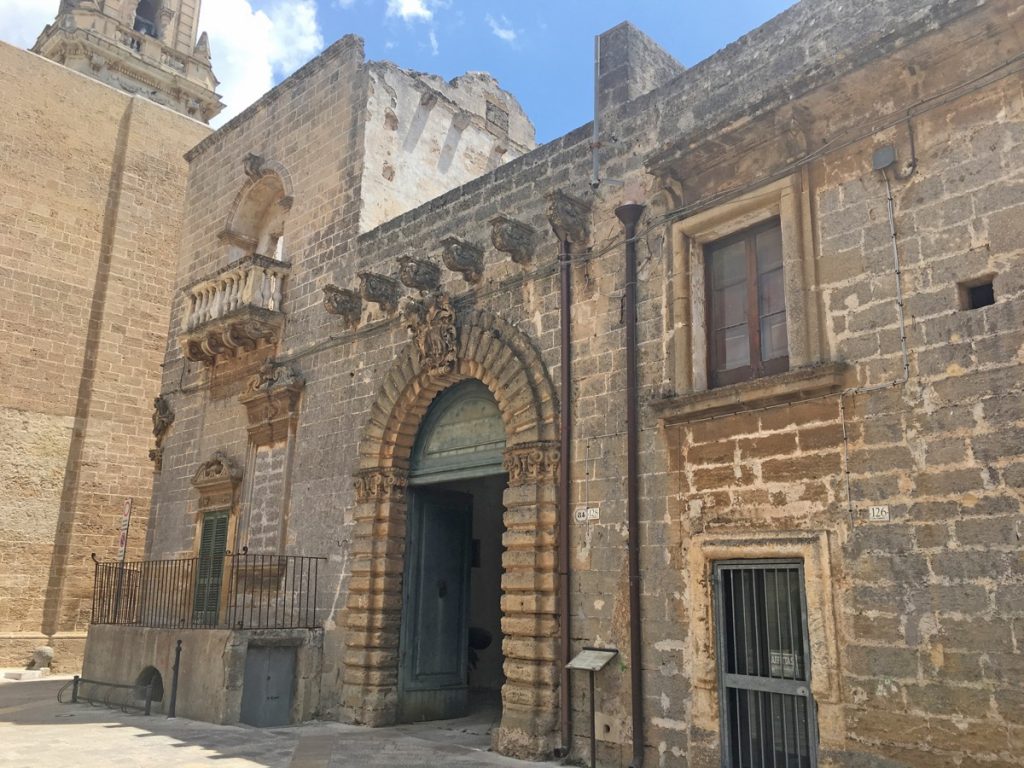 Ancient Palazzo Petrucci in the historic center of Trepuzi, a jewel of the sixteenth-century architect. Built starting from the 16th century, the palace is located in the ancient core of the town, next to the Mother church. Since 1998 it has been recognized of historical and artistic interest.
The building in carparo is divided into two bodies: the oldest one, adjacent to the churchyard, develops on two levels, the last of which is incomplete, uncovered, and decorated with sculptural decorations; the other body, the one to the right of the entrance portal, consists of two floors that correspond in height to the ground floor of the building above. On the main facade there is a rusticated portal with a round arch, surmounted by the Petrucci-Giugni family coat of arms and enriched with shelves decorated with naturalistic motifs. The coat of arms, made of carparo, consists of a shield on top of which two helmets with a crest are depicted, facing each other. On the left side of the shield there is an eagle with a crowned head and a stone between the claws (to symbolize the name of the family). On the right side there are three goat legs. To the left of the entrance portal there is a window and a French door surmounted by mixtilinear gables with volutes. On the first floor there is a loggia with a stone balustrade set on carved shelves.
The interior is characterized by various rooms, among which there is a room, part of the original core of the building, covered by a barrel vault with lunettes with decorated corbels and a door on whose lintel, in a cartouche we read: DOMVS FREQVENTATA DVLCESCIT / ET MALE CONTINVATA / TAEDIVM PARIT / DE KEMPIS / 1601 (“When the house is frequented it becomes sweet, when it is abandoned it produces boredom”) Library The building houses the family’s private library, where they gather, arranged inside of shelves of the eighteenth century and in small nineteenth-century stained glass cabinets, books published in a period between the second half of the sixteenth and the beginning of the twentieth century. These are mostly works of a legal-legislative and historical-humanistic topic
The courtyard inside the building on three sides lies a courtyard garden of singular beauty, which characterizes the architecture of this important building.

Trepuzzi (Trepuzze in Salento dialect) is an Italian town of 14,762 inhabitants in the province of Lecce in Puglia. Located in Salento, it rises north-west of the provincial capital, from which it is 11.6 km away.
Trepuzzi is historically inserted in the Terra d’Otranto, in the province of Lecce and in the diocese itself. Like all the other urban centers of Salento, Trepuzzi also followed the fortunes and events of invasions and dominations, from the Romans to the Goths, from the Greeks to the Lombards, to the Normans; it was subsequently subjected to the Swabians, to the Angevins, to the Principality of Taranto, to the Aragonese, to the Turks who sacked it, to the French and once again to the Bourbons and lastly to the Royals of Savoy. The first documentary traces are in 1190, when King Tancredi, after the death of his uncle William the Good, became count of Lecce and assigned all the hamlets of his countryside to the Bishop of Lecce. Fulgo or Fulgone Bello Leccese, councilor of Guglielmo il Buono, a patrician from Lecce, was bishop of Lecce from 1180 or 1183 to 1200 and therefore also pastor of Trepuzzi after the donation.
According to a pagan legend, an altar dedicated to the god Bacchus was built in the area near Sant’Angelo, at the time of the Romans, where the patricians of the nearby Lupiae met for the Bacchanals with parties, dances, revelry, revelry and orgies hence the name “Tripudium” given to the place.
Over the centuries the center grew and enlarged thanks to the decline of the Terenzano farmhouse. The fief of Trepuzzi and the sub-fief of Terenzano were subjected to the Acquaviva D’Aragona, counts of Conversano, who obtained the title of marquises. Over the years the feud was the subject of several controversies, which arose among the hereditary of the Acquaviva, and was seized several times by the Royal Tax Office for the lack of direct heirs. In 1725, Duke Francesco Carignani, also hereditary, had the task of governing it. Later, the same Duke Francesco Carignani bought the fief of Trepuzzi and the subfeudo of Terenzano in the year 1753. Symbols Heraldic profile of the coat of arms: Heraldic profile of the banner: Monuments and places of interest Religious architecture Church of Maria Santissima Assunta in Cielo, it is the mother church of Trepuzzi and dates back to the early 17th century.
Civil architecture Palazzo Petrucci (Trepuzzi), built starting from the 16th century, the palace is located in the ancient core of the town, next to the Mother Church. The building, in carparo, is divided into two bodies. On the main facade there is a rusticated portal with a round arch, surmounted by the Petrucci-Giugni family coat of arms and enriched with shelves decorated with naturalistic motifs. On the first floor there is a loggia with a stone balustrade set on carved shelves. The interior houses the family’s private library, where books published between the second half of the 16th and the beginning of the 20th century are collected. These are mostly works of a legal-legislative and historical-humanistic topic. Palazzo Bianco, the municipal seat, was built in the 19th century. The building, built in carparo, is spread over two levels and is adorned with sculptural decorations. The main facade, articulated by smooth pilasters with capitals, has a central mullioned window surmounted by the Trepuzzi coat of arms and gabled windows on the sides. Above them run a finely decorated frieze and cornice. The carvings, capitals and architectural structures are the work of the trepuzzino Adamo Miglietta. The interior, with an arched vaulted roof, features Art Nouveau paintings, executed by the Salentine painter Oronzo Pistone in the early twentieth century. Court houses, the courtyard houses are located in the block delimited by C.so Umberto, via Assunta and via San Giuseppe, the oldest area of the country. The court acts as a filter between home and street and is separated from it by a portal more or less decorated according to the user’s economic and social characteristics. The houses around the courtyard are characterized by a narrow front and the rooms are arranged one behind the other. The small size of the house, in proportion to the inhabitants, leads to a particular use of the outdoor spaces, where domestic activities take place. This structure represents that urban reality, whose characteristics are typical of a peasant civilization.