Neo-Palladian type villa with a large external staircase at the main entrance and with a large atrium which is a typical element of the Palladian architecture. Find out more about this villa for sale in Noventa di Piave.

The Roman language of this neo-Palladian villa, in accordance with the original syntax, adapts to the local characteristics with the use of stone and polychrome floors of the Venetian type.

The facade is tripartite and symmetrical, net of the slightly set back side body.

The loggia interprets the concept correctly, citing that convivial space for reading, shows and socializing.

From the point of view of the language there is also a tripartite division in the architectural order, with arches framed in two different Ionic orders on the ground floor and on the first floor, while on the second floor we find arches and windows framed in the Doric order with slender proportions ( of both orders).
The entablature is made with a central curvature that resolves the use of the Serliana composition of the loggia on the second floor.

The facade of the loggia on the second floor is distinguished from the others by the differentiation of the coupled systems of the Doric columns.

Columns and capitals restore verticality due to the continuity of the vertical elements. In this case, the Palladian syntax is reinterpreted, going backwards, instead of forwards the central span framed in the order.

In fact, if generally in Venetian architecture an atrium developed on three deep bays was used, to optimize the internal spaces generally constrained by small surfaces, in this case the reinterpretation is made possible by the much larger space available, thus allowing to integrate in the profile of the factory the covered loggia.

The rhythm generated by the overlapping of the three loggias is a clear reference to the Venetian – Palladian language which in turn alludes to the triumphal arch adapted serially on the entire facade.

The balcony on the first floor and on the main floor extends over the entire central span, while the final tympanum becomes curvilinear to adapt to the Serliana, also reinterpreted with a double-centered arch.

This element houses sculpted friezes and a raised cornice, protruding and characterized by a series of shelves that accentuate the relevance of the profile. 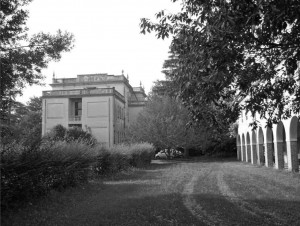 The lateral elements and the factory added laterally, slightly set back, help to mediate the verticality, restoring greater general stability and introducing an element of dissymmetry respect to the rigid Palladian schematicity. 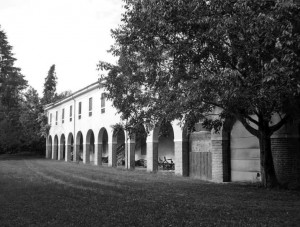 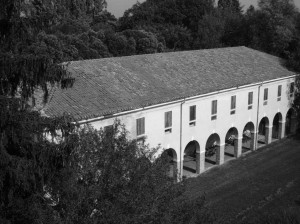 Next to the villa stands the Barchessa, a large L-shaped building with a splendid arched portico and constituting the remittances and the old granaries. The total area of ​​this section is 910 square meters plus a porch and terrace.
The two buildings are set in a context of absolute landscape value consisting of a centuries-old park of almost two hectares with tall trees, lawns and hedges making up an “Italian” garden.

The entrance characterized by the Venetian flooring revolves around a marble staircase, with a large central ramp leading to the first floor, from which two stairways branch off at the sides which in turn lead to the representative living hall on the first floor. Further two floors above ground with relative living and sleeping areas and a roof terrace conclude the vertical development. 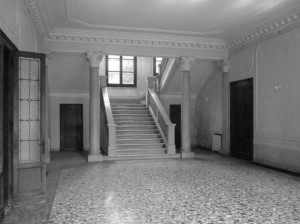 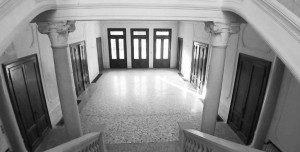 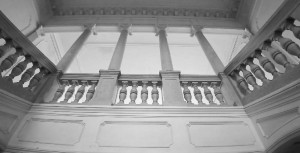 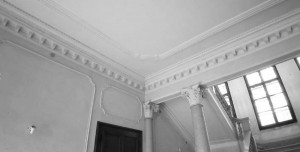 The Palladian quotation is a synthesis of the transmigration of the language of the Renaissance centers that takes on different declinations depending on the places where it is located; in Venice it encounters a certain resistance made evident by the reinterpretation of the Serliana and the curvilinear tympanum that denounce the introduction of the new architectural language expressed in V the sixteenth century Veneto.

The large openings on the central front become the means to make the relationship between architecture and landscape usable, reaffirming the concept of spatial continuity, relationship and dialogue with the typical context of sixteenth-century architecture. 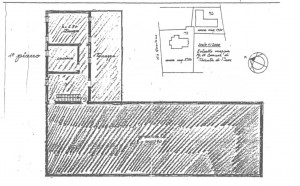 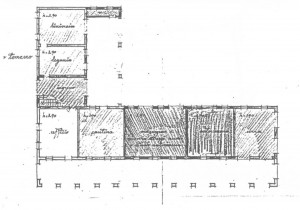 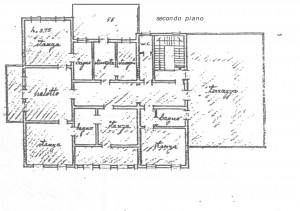 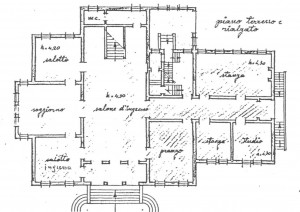 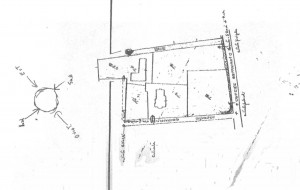